Cinnamon roll is a sweet roll served commonly in Northern Europe and North America. My husband and I are big fans of cinnamon rolls, therefore I decided to make a delicious vegan friendly, super light, less calories, and gluten-free cinnamon rolls. After many attempts I finally managed to put together the perfect recipe of these delicious beauties. These cinnamon rolls are extremely fluffy, healthy and super tasty – I mean it. These light cinnamon rolls will tease your senses with their mind blowing aroma, and no it doesn’t stop there, just grab a fork and gently press down a roll and it will feel like a fluffy pillow.

I have included in the ingredients many alternative options, so anyone can make it at home whatever items they have in their kitchen. It just requires a little bit of whisking, folding, and baking. If you think you can do that, then let us make some delicious cinnamon rolls! 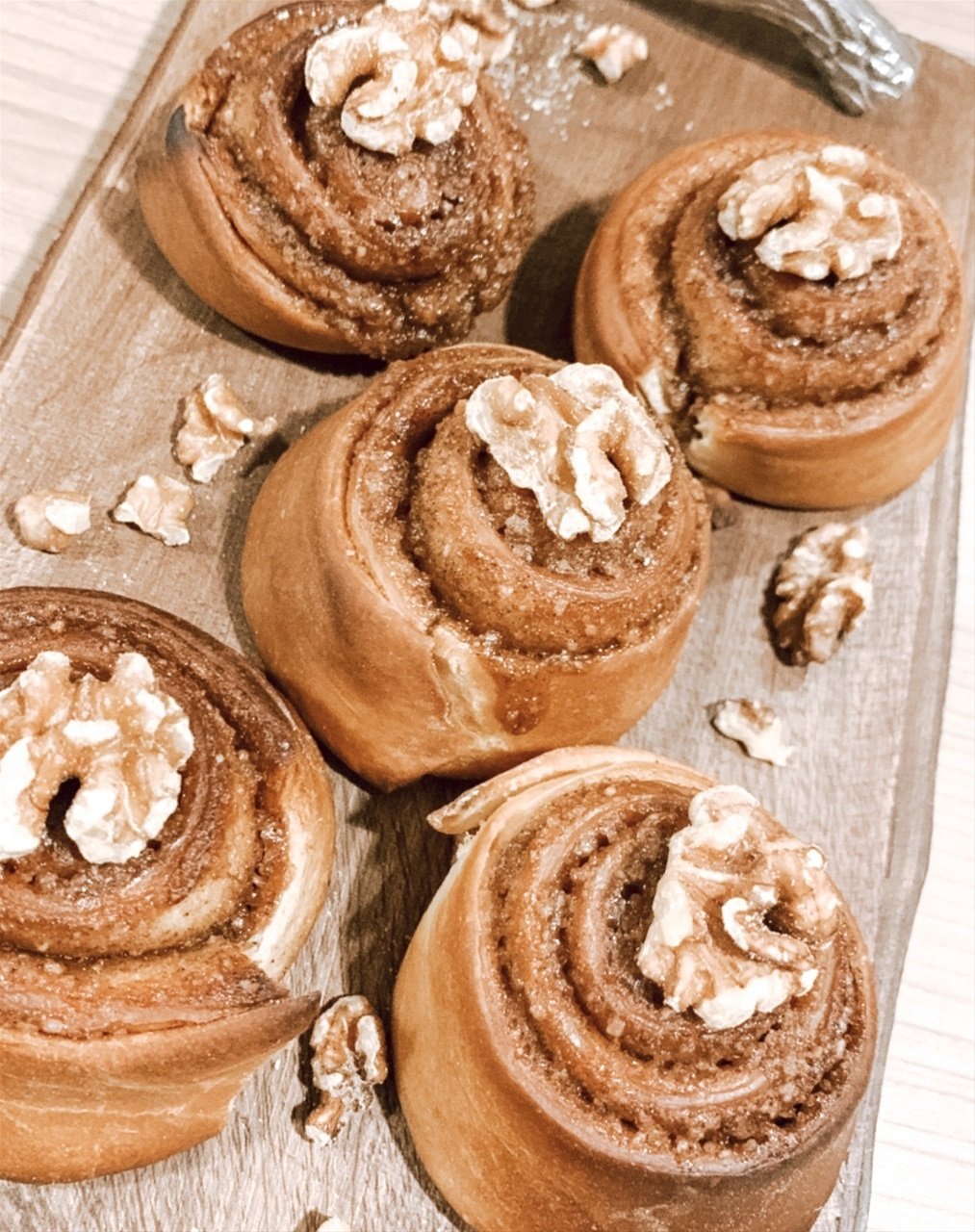 3/4 cup coconut milk (or any other plant based milk) 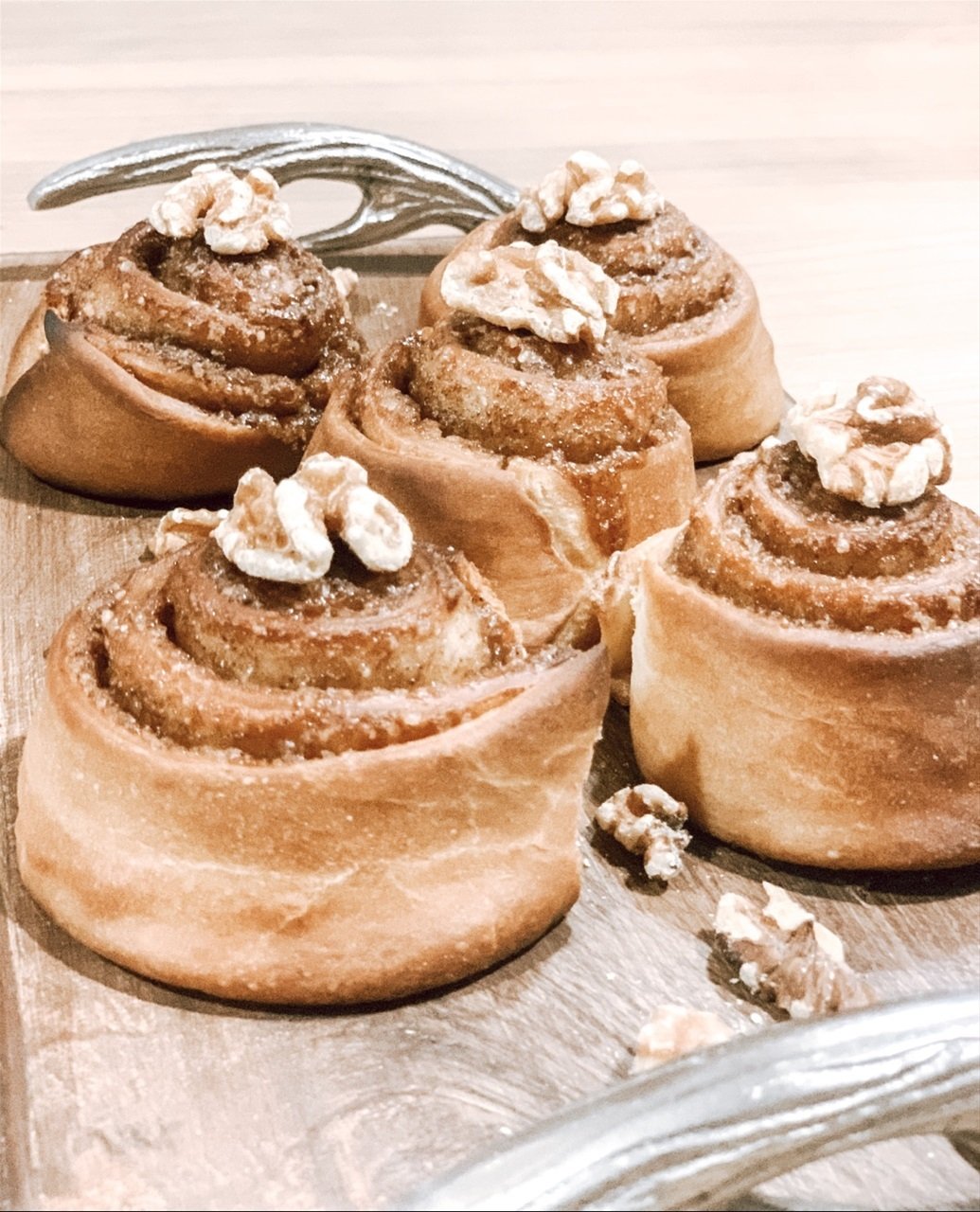 First we start off by making the dough. Warm up the coconut milk or any other plant-based milk you would like to use, add the fresh lemon juice, and leave the mixture to sit for 5 minutes on its own. After the 5 minutes has passed, reheat the milk to be warm once again and add slowly by stirring in the yeast and sugar. Once combined, cover it with cling-film and set aside for 10 minutes. You must be very careful with the yeast. Keep the milk between 43° and 46°. Any cooler and the yeast may not activate properly. Any hotter and you may kill the yeast before it has a chance to help the dough rise.

In a separate bowl mix together coconut flour, baking powder, baking soda and salt. Make sure you mix everything well, then set the mixture a side. Next we will mix together in a separate bowl room temperature vegan butter and coconut oil (make sure you melt the coconut oil slowly on its own on top of boiling water; do not melt it in the microwave). Make sure the butter is also room temperature soft not melted in the microwave, as soft butter mixes together better with oil than melted butter. room-temperature butter will also mix easier and more evenly into the dough. Mix the two ingredients together by hand.

Now add slowly the butter mixture into the flour mixture, mix it well with your hands. Use your hands as it will be easier to mix than to use a spoon, as the mixture will stick on the spoon. Add the milk mixture to the flour gradually and knead until you get a smooth dough, will take 7 – 10 minutes of kneading. You will know the dough is properly mixed when the dough is pulling away from the sides of the mixing bowl and the dough is tacky, but not sticky, to the touch. Place the dough into a clean and dry bowl (I would suggest to oil slightly the bowl prior before placing the dough in, as it will help to remove the dough from the bowl later on), cover it with a towel. Keep the dough in a warm place in the kitchen for about 1 and a half hour to rise (you can make this dough the night before. When done the kneading, cover and refrigerate). Many factors, including the recipe, room temperature, and humidity, will determine how long it takes for your dough to rise – you can check from the dough tips & tricks section in this article for different methods.

Yeast dough is considered “ripe” when it has risen enough – usually doubling in size. The ripe test determines if the dough is ready to be punched down and shaped. Gently stick two fingers in the risen dough up to the second knuckle and then take them out If the indentations remain the dough is “ripe” and ready for punch down. If not, cover and let the dough rise longer and repeat the test.

For the filling, put the walnuts in a blender and blend until the walnuts are powder looking. Add the blended walnuts powder in a bowl together with room temperature softened vegan butter, coconut sugar and cinnamon powder. Mix the mixture by hand to ensure that everything is well combined. Set the mixture on the side in a cool place. You can use any other nuts instead of walnuts – just make sure you blend into a fine powder as it is easier later to put the cinnamon filling on the rolled dough.

Place some flour on kitchen table, start to roll the dough into a rectangle 24'' by 18'' size. Take the filling mixture and evenly spread the filling on the rolled dough. I do it by hand as then I can make sure its evenly spread. Once the previous steps are completed, then roll the dough up from the longest side – roll tight but not too tight. Pinch the seam tightly. Cut the roll into 10 - 12 even slices, place them on the baking sheet. Make sure you have enough space between the rolls for them to expand when left to rest. Cover the rolls with a towel and leave them on room temperature in the kitchen to rise another 1 hour. Preheat the oven to 180C/360F. Bake the cinnamon rolls for about 15 -18 minutes or until they are golden. Once the rolls are ready, removed them from the oven and leave them to completely cool down on room temperature.

Let us prepare the coconut vanilla glaze for the cinnamon rolls. In a bowl mix together icing sugar and vanilla powder, then add the coconut cream (or plant- based milk). Whisk until the mixture is smooth, creamy, and thick. For the peanut butter sauce – slowly melt the peanut butter on low temperature above hot water. After that mix in the maple syrup and stir well, do not over mix. Leave the mixture to cool down on room temperature, then use to put on top on the cinnamon rolls. Make sure the cinnamon rolls are completely cooled down before adding the glaze. You can add as decoration some coconut powder, chopped pecan or any other nuts. 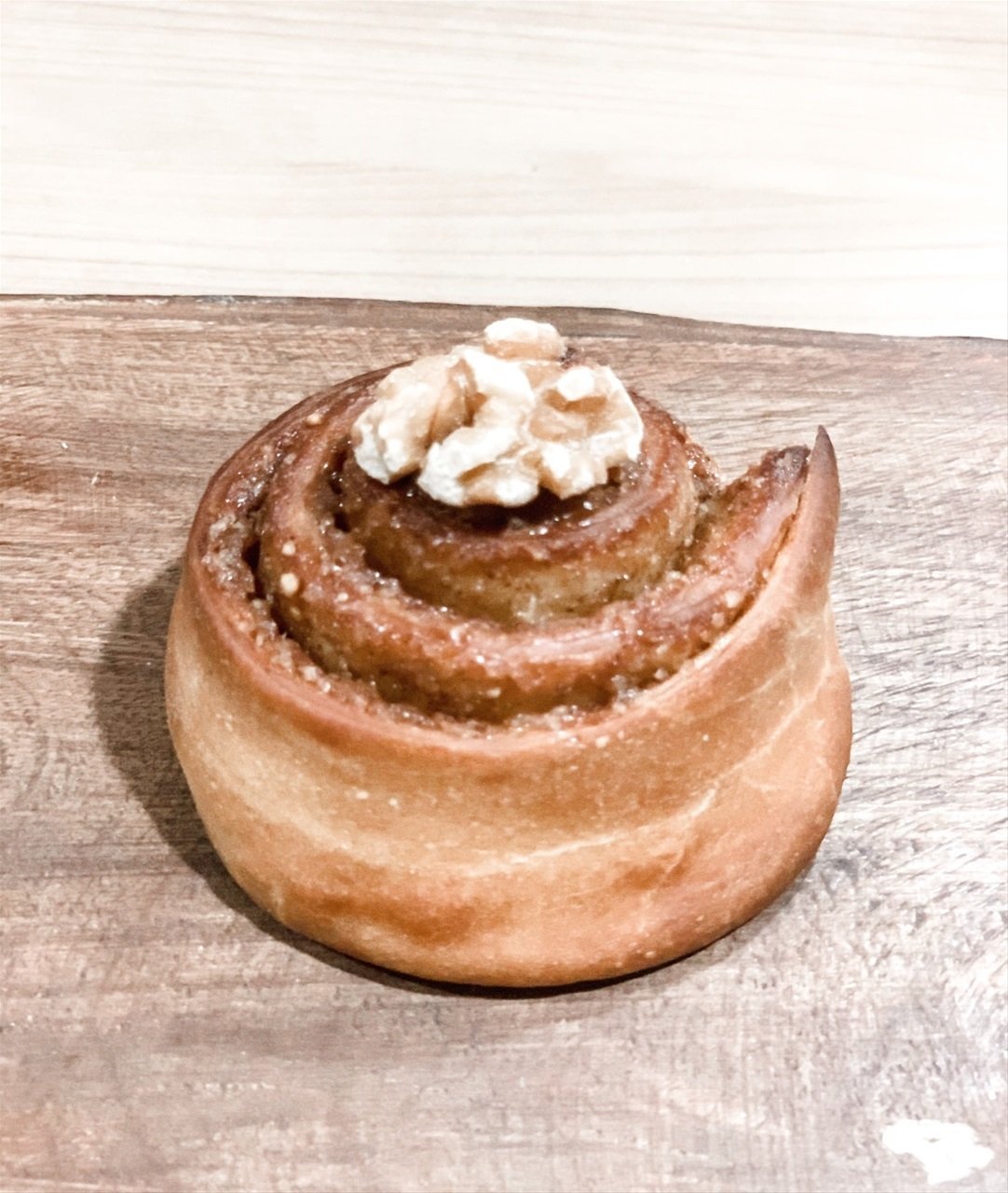 ' Be careful with the yeast '

Whether you are a seasoned pro or a new baker, this list of tips will help you perfect the art of making cinnamon rolls. You must be very careful with the yeast. Keep the milk between 43° and 46°. Any cooler and the yeast may not activate properly. Any hotter and you may kill the yeast before it has a chance to help the dough rise. Yeast likes a warm environment, so using room temperature ingredients will keep the dough at the perfect temperature for optimal yeast activity. Plus, room-temperature butter will also mix easier and more evenly into the dough.

Too much flour and the rolls will be dry and tough. Not enough flour and the rolls will not have enough structure to rise and will be dense and soggy. Toward the end of mixing, gradually add a tablespoon at a time and check the texture of the dough after each addition. Before you roll out the dough, lightly flour your work surface to prevent sticking. It will save you the frustration of rolling out the dough into a perfect rectangle only to have it stretch, tear and stick to your counter as you roll it up.

When it comes to baking cinnamon rolls, 190°C is the sweet spot. Because it’s an enriched dough, an oven temperature that’s too hot can cause the rolls to brown too quickly before they’re fully baked. On the other hand, an oven temperature that’s too low may cause the rolls come out too blonde. The perfect cinnamon roll is a deep golden brown with an internal temperature between 87°C and 93°C. When pressed gently in the center, the cinnamon rolls should also feel firm, not squishy. Just another reason you need a digital thermometer!

You may find the recipes call for melted butter for the cinnamon roll filling. However, using softened, room-temperature butter mixed with the other filling ingredients will enable you to spread the filling more evenly over the dough and result in less waste as you roll up the dough.

' Be generous with the filling '

Cover every square inch of the dough with your delicious cinnamon-sugar filling! Just leave a small section along one edge bare so you’re able to easily pinch and seal the seam closed once the dough is rolled.

When rolling the dough, take care to roll it as tightly as possible. This will not only maximize the number of yummy cinnamon layers, but help the rolls hold their shape while baking and when serving.

' Give them space for rising and baking '

Before baking, the rolls will need to rise a final time. Like teenagers, cinnamon rolls need their space during this critical phase of their development. Place the formed cinnamon rolls on a baking sheet 1-2 inches apart to ensure an even, full rise.

' Allow the rolls to cool down '

Let the rolls cool for 5 to 10 minutes before icing. If the rolls are too hot, the icing will tragically ooze right off and into the bottom of the pan. A warm roll, however, will let the icing easily spread over the top and also set in place before serving. 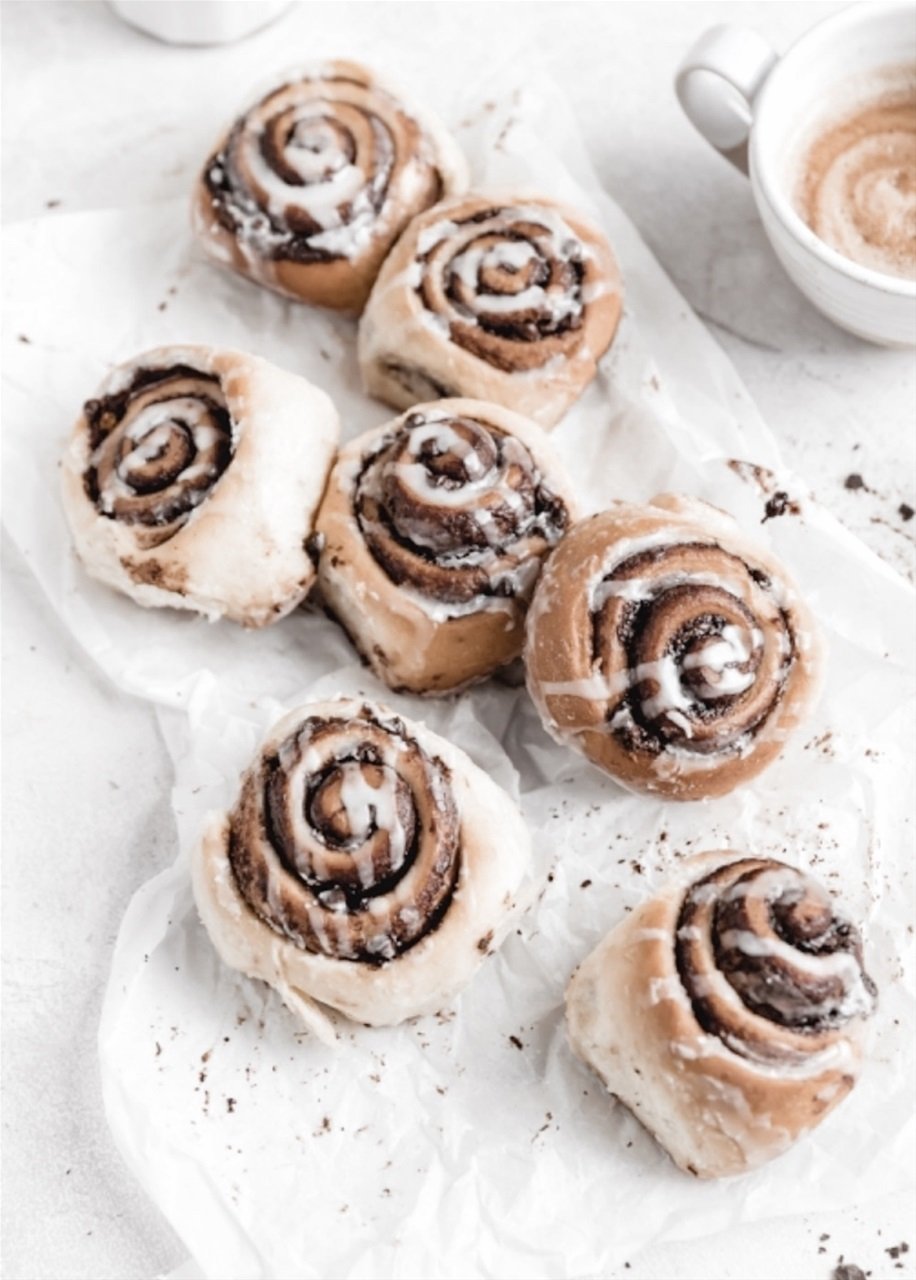 The oven is an ideal place for dough rising. For an electric oven or a gas oven with the electronic ignition, heat the oven at the lowest setting for one or two minutes, then TURN IT OFF. In other gas ovens, the pilot light will provide enough warmth, so you don’t need to turn it on at all. The oven temperature should not exceed 90°F during the rising time. Place a pan of very warm water toward the back of the oven to provide moisture, which keeps the dough soft during rising. Place the covered bowl or pan of dough on the center rack and close the door.

The microwave oven can also be used for the first rising of doughs. Place 1 cup of water in a glass measuring cup in the microwave. Heat on high for 2 minutes. This creates a moist environment to keep the dough soft during rising. Place covered bowl of dough in microwave and close the door.

Put 1 cup of very hot water in a glass measuring cup or small bowl in warming drawer. This adds moisture and will keep the dough soft during rising. Turn knob to low or “proof”. Place covered bowl of dough in warming drawer and close door.

When the dough completes its first rise, take a moment to place the dough in a clean, slightly oiled bowl. This extra step will make the dough easier to remove after proofing and allow the dough to rise higher since it will not be working against the bowl.

When proofing, cover the bowl containing the dough and place in a warm spot in your kitchen. A sunny window or the top of your oven works great. Wherever you place the dough, just make sure it is hanging out in a place with a temperature between 24°C and 35°C. Another option for proofing cinnamon roll dough is letting it rise overnight in the refrigerator. A cold fermentation process means the yeast releases carbon dioxide more slowly, which results in a more complex, robust flavor.

Chilling the dough before using it. Even if you let the dough rise in a warm place, it’s best to let it chill before shaping. The benefit is that you’ll find the dough much easier to roll out and shape. This means you’ll have tighter, more uniform rolls after baking.

I truly hope that you will find the walnut cinnamon roll recipe as delicious as I do. Enjoy this beauty!